The trip has flown by, but lasting impressions have been made.

Monday morning the team visited our first rehab center. Pastor Candido has been faithfully active in ministering to these men and teaching them to play instruments and several of them performed for us. How incredible! That men who once were addicted to drugs are now singing God's praise!

We had a time of testimony and several of the men there shared their stories of how they had been at the bottom of the bottom and God had rescued them.

As they shared and as we sang together, it was rather amazing how our hearts and spirits connected in beautiful oneness. Truly we have brothers and sisters we never knew about! God works in mysterious ways, and often, we will never hear of all He has done.

As Stephanie Weber shared, in the song Santo, Santo, Santo or in English Holy, Holy, Holy we sing about being around the throne. Singing that with the Mexicans is a special blessing. It's a small taste of heaven, where every tribe and tongue and nation will gather around to praise our God.

At each rehab center we visited we left a bookshelf and a few books. As we are able to visit again in the future, we will add to the library a few books at a time.

Thursday we were able to visit the first rehab center again. We gathered in a large circle to sing hymns together, and again we had a time of testimony.

Then we played games together. Indeed, this if family!!!! The games were great fun, and if I may say here, I (Ellie) won the Ultimate Trashcan game.

What I would really like to impress on you, is that you have brothers and sisters in Christ in Mexico. We heard stories about destroyed marriages, destroyed families, living in abandoned houses, young teenagers on drugs, and lives ruined by addiction. Rehab center after rehab center, relapse after relapse, until God saves them and changes their lives. Through Christ we are overcomers. While the world says, "once an addict, always an addict" the Bible says, "the truth will set you free." Many of these men want to be pastors and help people who are in the same situation they were in. And most of the directors of the rehab centers were once addicts themselves.

Please remember your family in Mexico and in other parts of the world.

America is so small and contained as far as we see it, but God is so big and beyond all that we imagine. And He is working in Mexico, among the men who had no hope before Jesus. Pray for these men, pray for their growth, and pray for the lost.

- Posted using BlogPress from my iPad

Posted by Psalm 67 Missions Network at 9:10 AM No comments:

I have been asked to document this trip to Mexico. Here is what I have journaled so far, and what has impacted me.

If I left Mexico right now I would already be full of God's goodness and have so much to tell.
Our journey down was truly blessed. Though the forecast showed  storms on both sides of our route, our path was all clear blue skies.

Friday morning we stopped by an indigenous coffee shop and when we talked with the owners we discovered that they were Christians! We prayed with them and they gave us a few Spanish/English Bibles to take with us. We were both very blessed, and these are just a couple of the blessing from the road trip. The fellowship and singing were very great and encouraging.

Friday afternoon we arrived at the church and had a family reunion. The hardest part of documenting this trip is trying to describe the atmosphere. Unless you have been here, it's hard to understand that this is home away from home. People whom I can barely communicate with are truly my family in Christ. Even though I can't understand Spanish, we greeted each other with hugs and kisses and large smiles, which are universally understood. We love each other because Christ loves us.


After we arrived and unpacked, some folks went shopping and the rest walked through town and invited people to the Medical Clinic, which we ran Saturday.

My favorite memory of Friday was as I was walking, preparing my sparse Spanish for my next encounter, I saw a face light up. A couple moments later and my little amiga was hugging me around the waist. I was so pleased that she remembered me! Not only remembered me, but remembered me enough to run up and give me a hug. It made my day!

Saturday we got up early and after a great time of devotion we set up the Medical Clinic.

We must have been good at inviting people, though I wouldn't have guessed it while handing out the flyers.

While people waited in line to see "Dr. Stephanie," I invited the kids to get their face painted and color fuzzy posters. We also played with water balloons, and just water in general. All morning I ran back and forth. (It was hard not to, I have having so much fun.) Draw on this kid, hug this one, ask for this name, throw a balloon at this one, play hide and seek with this one, play volleyball with this one, and from several I learned the words for "up" "down" "here" "there" and of course my colors. It was a good day! 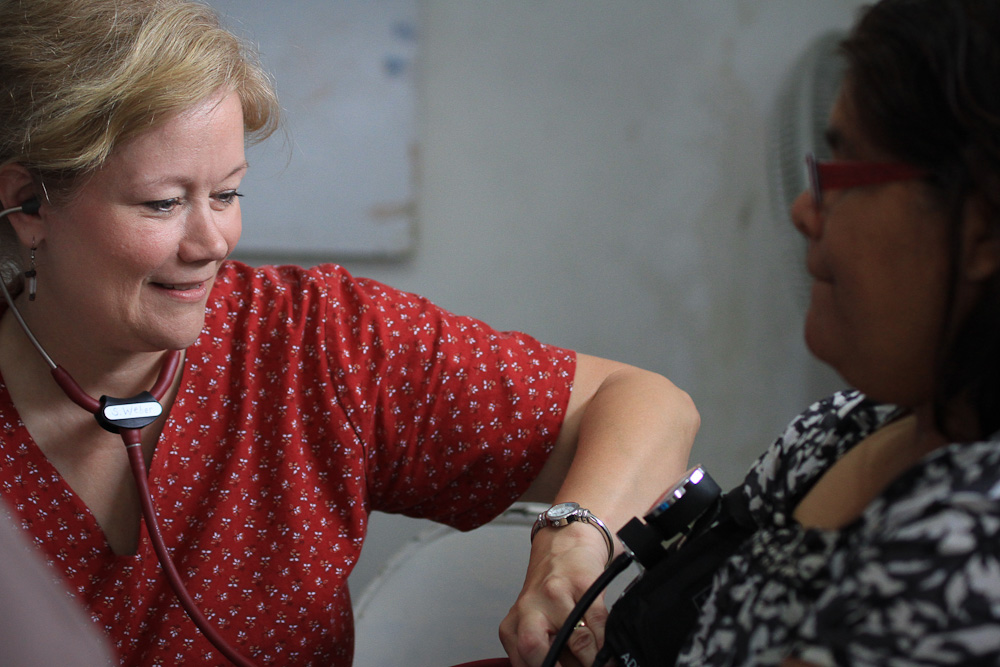 Somehow these kids got me to kneel so they could take turns popping water balloons over my head. Then they wanted me to lie down and literally pinned me there. I had to wrestle my way out and then run around the field to get away.

After lunch, where I learned the Spanish word for "potato" "meat" and "rice" we went to the green area to play soccer. A crowd of young men were already gathered around and warming up for the big tournament. Not only are these guys super athletic and fast, they would sacrifice their neck to get the ball. So with some fast moving Mexicans and some Gringos thrown in, we had a good time. I didn't sit and watch the whole time, I played a miniature game with the younger kids and a couple older ones who joined in. 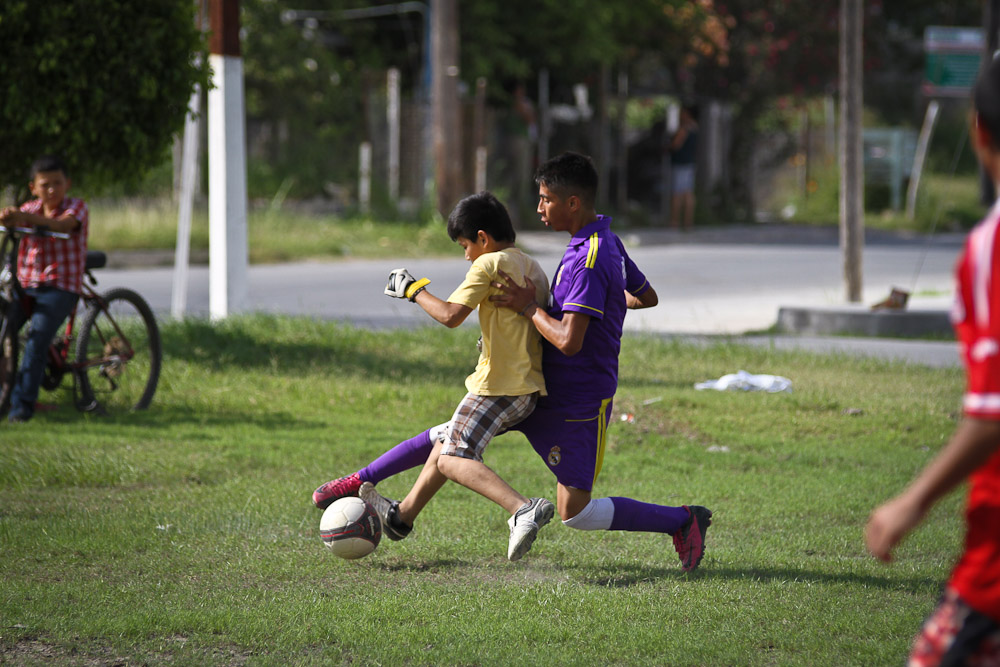 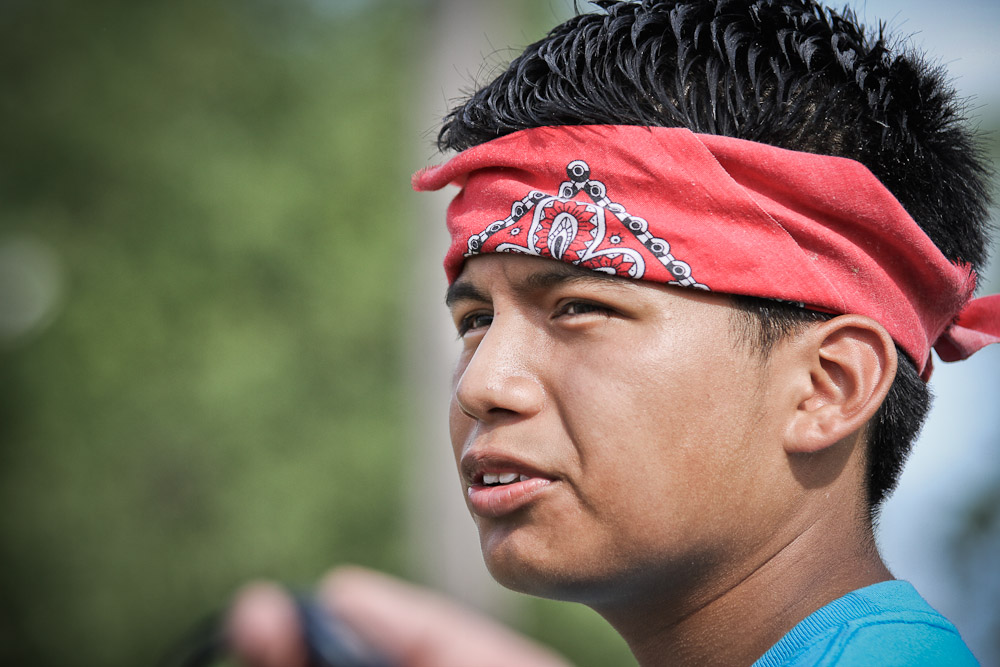 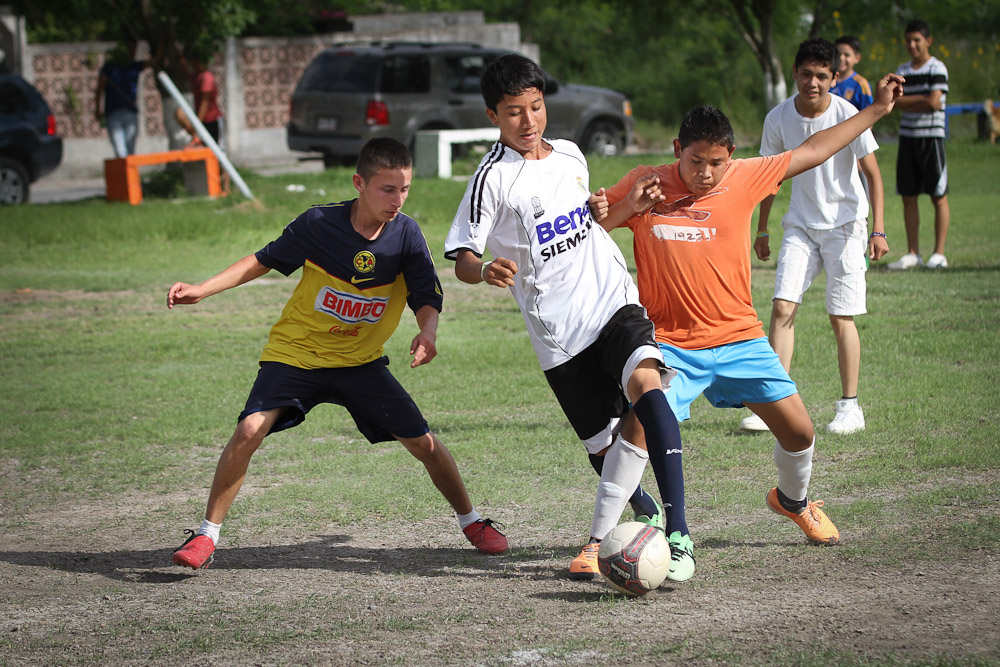 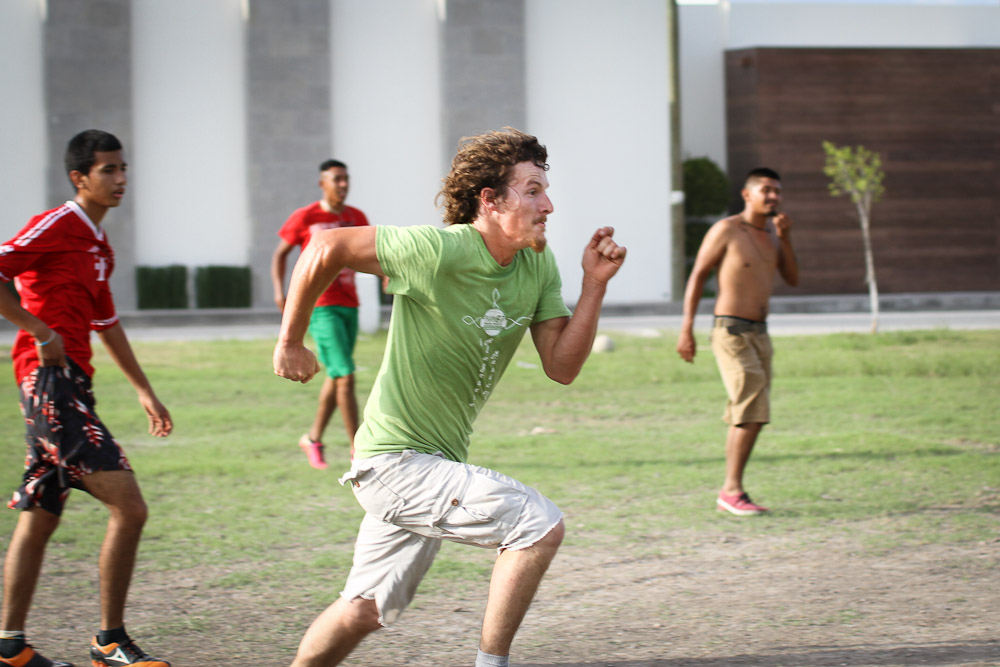 We also gathered the kids around in a circle and Sarah told the story of the Prodigal Son and Ismael translated.

Before the very last game of the tournament, we fathered the young people around and gave them the gospel and prayed over them. Then after the last game, we awarded prizes to the winning teams.

I am constantly convicted by the people I am working with. They serve without complaining and volunteer without being asked. They take the initiative to say hello, and they love without condition.

Like I said at the beginning, I have been so blessed through it all, and I can't wait for more. I think my eyes glow when I think about the rest of the week.

And if I keep learning Spanish this quickly, I'll be Mexican in no time!

Signing off from Tamalipas Mexico,
Ellie
Posted by Unknown at 3:05 PM No comments:

A little bit less than two weeks before our May Mission team will head out to partner with the body of Christ in Mexico. We have talked about support for the theological libraries that we hope to establish in various locations. We have discussed the medical clinic but we haven't talked a lot about some "new work" that we hope to see.

Pastor Candido has asked us to pray because our schedule is going to be packed (like normal). Of course we will have the regular team meetings with lessons, devotions, praying, singing, sharing meals together. In the mornings following or morning meeting we will set out for visiting a different "rehabilitation facility" each day. Following lunch each day our team will be assisting the congregation in "sowing seed" in "areas verdes" or "green areas", meaning areas where the is not a current evangelical work.

Pray for our team as we will be working with the Pastors and the congregation to preach in public as The Lord allows, engage the people in Bible study, and form relationships that we hope will allow the congregation to continue work in the future and see a church planted.

Thank you for praying. Our team would like to thank everyone for the overwhelming amount of support received in preparation for this mission. Your notes of encouragement, reminders of your prayers for us, and your financial partnership is a blessing to all of us!

Your May Missions Team


- Posted using BlogPress from my iPad

Posted by Psalm 67 Missions Network at 1:51 PM No comments: