Psalm 67 Missions Network would like to invite you to be a part of two Summer Missions Opportunities this July!

Dates:
Both trips will have similar assignments. You will be working with a small, Hispanic congregation to serve in their community by:
A few things other items of note:
If you or your group is interested, please contact us right away at office@psalm67missions.net
Posted by Psalm 67 Missions Network at 5:59 PM No comments:

Concordance & Missionaries - "Saturday is for Suriname" 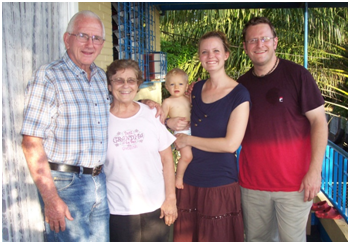 Many of us take our concordance for granted. Our English concordance has become a search engine on a computer, which makes Bible study so much quicker & easier. Perhaps some of you remember the days of the book concordance, and flipping back & forth, searching many Scriptures to find the one you’re looking for. And to search for all verses with the same two words was extremely difficult & time consuming. Now we do it all with a few clicks of the mouse. Yet what an amazing tool is a book concordance if you have no computers, and there’s never been one in your language. Imagine the joy!
That’s the joy of the Wayana tribe in the jungles of Suriname. World Team missionaries Margaret & Jan have just completed a concordance in the Wayana language, and are now distributing them in the tribal villages. The tribe, who meet daily for worship, are excited about this new tool for knowing God’s Word. Praise God for his provision!
Another exciting development is that one of the tribes is sending out their own missionaries. They recently sent out a team to find a mysterious tribe in the jungles, who shy away from others, and are unknown to the other tribes. No one knows what they are like or what language they speak. The believers are very courageous & self-sacrificing for the spread of the Good News of Jesus.
Roy & Margaret (pictured with the Pfleegors) have served the tribes in Suriname for over 40 years, and will soon retire. Marco & Marjolean from Holland are replacing them, and there’s a need for another missionary to help. Roy was a soda truck driver before becoming a missionary.
Michael & Erin Pfleegor will help out some with the ministry to these tribes, but their focus will be more on unreached people in the capitol city of Suriname, Paramaribo. Psalm 67 Missions Network is partnering with the Pfleegors in this ministry. Please, prayerfully consider what part you too might have in this ministry for the glory of Christ. Thank you.
Posted by Psalm 67 Missions Network at 1:11 PM No comments:

Saturday is for Suriname!

Suriname is a small country on the Northern coast of South America. It was a Dutch colony until 1975, so some still know it as Dutch Guiana. Suriname is very ethnically diverse with peoples originally from Africa, India, Indonesia, China, Brazil & Europe, as well as, Amerindians. Dutch is the official language, though each ethnic group has its own language. The people from India, for example, still speak an Indian language, though they have dropped the Indian script and now use Latin letters like Dutch or English.

There is much need for the Gospel in Suriname. Many of the ethnic groups there are unreached, though some are already working to bring the Gospel to them. World Team has been working for over 40 years in the jungle with the Amerindian tribes, some of which are now sending out their own missionaries. One couple, originally from neighboring Guyana, the Shiwdats have been serving in Suriname's capitol city Paramaribo for over 20 years.

Psalm 67 Mission Network is partnering with Michael & Erin Pfleegor, sent by Rockport Baptist Church, to labor with the Shiwdats & World Team in Suriname. Once there, the Pfleegors will learn Dutch, and then begin spreading the Gospel in Dutch. They will also help train interns from Psalm 67, and work with small groups who come for short trips.

We are excited about this open door from the Lord of the Harvest to reach unreached peoples with the Good News of Jesus. We would like to send the Pfleegors by January of 2014. God has already graciously provided; the Pfleegors already have 50% of what they will need to move to Suriname, get settled & learn Dutch. We also need families & churches to commit to regularly supporting them when they are there. Please consider partnering with us in service to Christ & the peoples of Suriname by prayer & financial help. Pray with us that God will continue preparing the Pfleegors for this great undertaking, and that he will provide all that we need to send & support them. And send your contributions to Psalm 67 Missions Network. We will keep you updated on their progress.


- Posted using BlogPress from my iPad

Posted by Psalm 67 Missions Network at 8:11 AM No comments: